My Life in 24fps vlog

From the time we can start standing on our own two feet I think nearly every human being falls in love with dinosaurs. I remember one of my first cuddly toys was a grey stegosaurus. Of course being a kid that grew up in the 90’s it was magnified by Jurassic park that my parents took me to the cinema at least three times to see, and that was over the course of moving to a new military base.

needless to say Dinosaurs have always been a thing for me, so when a dear friend of mine surprised me and said we were going I was beside myself. I went into commuter mode making our way into London and arriving at the O2 in Greenwich. Now I have been to the peninsula for various VFX conferences, eaten at the restaurants, been to the cinema, sailed around the O2, hell I have even climbed up the O2 but this was the firs time I was actually going into the O2.

we went through a normal security check and then made our way up a steep escalator and then we arrived in the main arena concourse and immediately saw people selling pop corn and a souvenir shop with various gifts, smells of hot dogs and burgers filled the air. within seconds I felt like a kid again remembering the days of going to sporting events with my parents. feeling the excitement rise I was barely able to keep my composure as we found our seats. THEY WERE AMAZING SEATS.

Hands stuffed with various junk food feast we were ready for the show to start. The arena set up reminded me of an ice hockey game. The show started and was narrated by a famous nature presenter that my friend knew but not being natively British I didn’t. but it didn’t matter she was great and we started in the Triassic Period.

(Spoilers Below of the Show)

We started learning about the Pangea Continent and opened the show with some babies hatching out of some eggs, then out of the smoke came a carnivore and immediately ripped the baby from egg and held it in mouth. Now I know its a learning programme but I will say I wasn’t expecting that. Later the mother came out and scared the predator away and then did a walk with her babies. we then learned about rains and vegetation growing and leading us into the Jurassic Period. It was cleaver how the trees and plants grew and I was very impressed.

This is when our first big dinosaur came out and it was the stegosaurus. I looked at how it moved and wondered if these creatures in the show were life like as this puppet was magnificent. I felt my mind go into overload and my inner child was amazed by the sight before me, but the theatre major in me wanted to know all the technical working behind it.

A pesky Alosaurus came out and tried to attack the Stegosaurus and learned to leave and fight another day, but then a young Bracheosaurus came out and once again amazement of how big these creatures were transformed me out of the O2 and back in time. 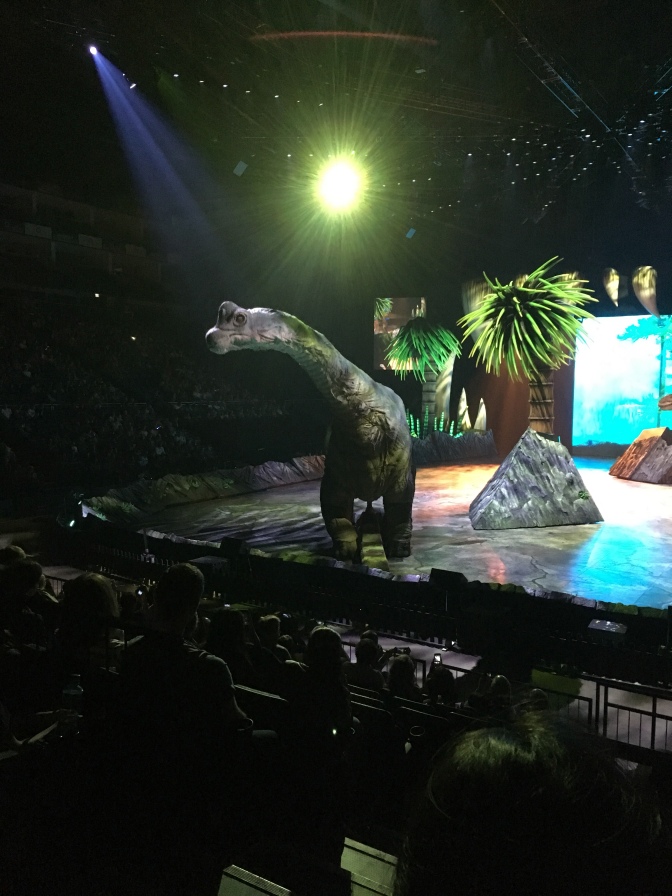 After a 20 minute intermission we were in the most famous era of Dinosaurs, the cretaceous period. I think most of our classic dinosaurs we grew up learning about are from this era.

we learned about the introduction of flowers and co-evolution with insects. It was a cool part but I would be lying if I said I was a bit bored with this part, I was just ready for the next large creature to come through the curtain. It was still informative all the same, but the only part of the show, if I was to fault it, I would say was this. 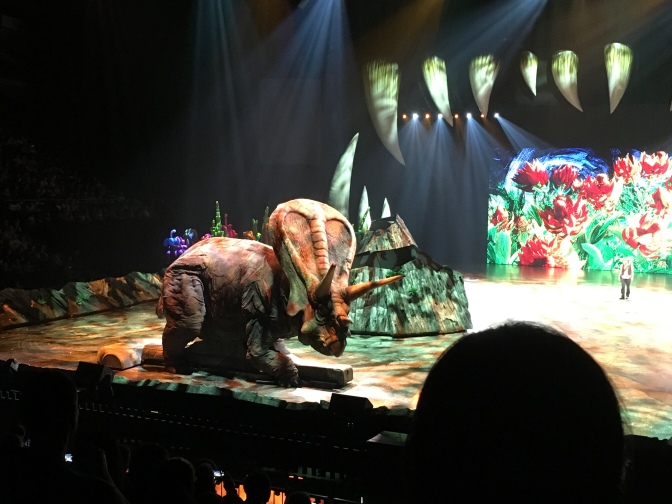 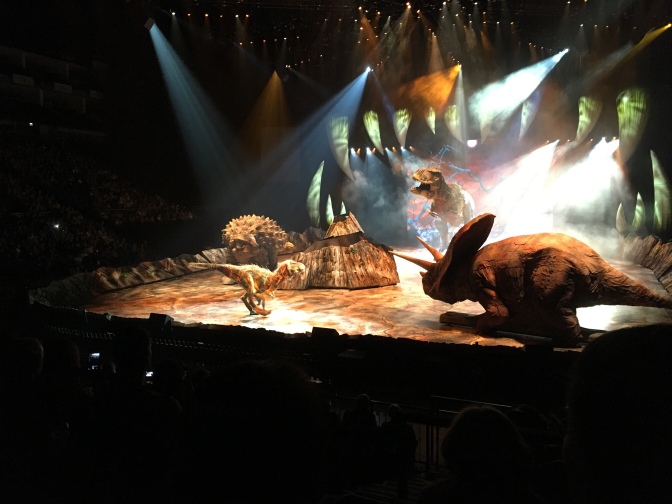 I forget sometimes is these are not horror creations for a Hollywood film (ok some are now out of date based on new findings but I digress) These are mythical creatures like dragons and unicorns, no these animals walked on the same spot that I am sitting in right now as I write this story. To me that boggles the mind and I think that is what captures the excitement in all of use

I have done all sorts of crazy adventures, but I want to do more. Originally a Film maker from Colorado, now working in VFX in London and starting to vlog and document my crazy life! View all posts by Shannon Moran